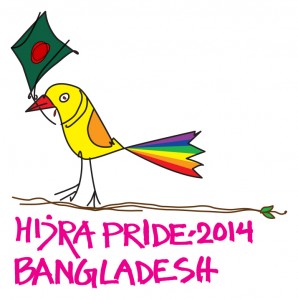 Background and the Context

Hijra’s/Transgender have a special place in South Asian history as semi-sacred persons and this culture prevails in India, some part of Sri Lanka, Pakistan and Bangladesh. They hold an ancient association with a Hindu goddess of fertility to which they are said to sacrifice their own fertility for the sake of others. It is traditionally thought that apparent males who are born intersexed are recruited into the Hijra community and surgically have their genitals removed. By becoming eunuchs, Hijras become semi-sacred, and can bless the health and fertility of newlyweds and newborns. They wear women’s clothing, i.e., saris and salwar kameez, dance and sing and, in general, behave as women.  The special role of the eunuch is an ancient one and was recorded in Pharoanic Egypt thousands of years ago, though at the time was associated with the occupation of the royal guard. Eunuchs were utilized as royal guards in several Islamic societies of Asia, most recently in that of the Moguls. Some became famous as soldiers, and important political persona within the Mogul courts. The eunuch and other specifically named gender-altered roles also served as entertainers and prostitutes in numerous societies throughout Western and Southern Asia for many centuries.   Gradually, with the decline of Mogul political control in India, Hijra’s too lost their social position. Many joined the homes of minor royalty as cooks and other domestic workers and a few inherited properties in that way. With the outlawing of their traditional surgical practices by the British in the late 1800s, they were criminalized and further marginalized from society.

In Bangladesh, the old respected role of blessing newlyweds and newborns has been kept alive in some traditional rural communities and in Old Dhaka, among the oldest, indigenous families. In this tradition, Hijra’s are paid in cash and food on the occasion of a household party to sing, dance and bless a newly married couple or newborn baby. In addition, Hijra’s have a traditional right to demand food for free at markets, called badaikhata, a type of demand not interpreted as begging. Due to their semi-sacred auraand social ambiguity (being neither male nor female), they are able to command a certain respect, heavilymixed with fear, among the general populace. The earnings gained through these traditional roles are pooled through the guru system, to create a degree of social and economic safety for all.

Today the financial gains from such modes of income are poor indeed, and urban Hijra’s have increasingly become sex workers, a fact they decidedly do not like the general public to recognize, as it would destroy their capacity to do badaikhata. Modern Hijra’s in Bangladesh are not all eunuchs, though true gurus definitely are. In modern vocabulary, Hijra’s are transgender or transsexuals (the latter term is one that generally distinguishes those undergoing surgical alteration of the genitals).   Among Hijra’s in Bangladesh today, there is considerable variety of gender presentation, personal identity and practice. The social identity of a Hijra is based on commitment to the Hijra way of life, i.e. allegiance to a guru, to the pooling of earnings and submission to group rules. Their own communities, centered on their gurus, are the social worlds in which they live and protect themselves from the extremely marginalized position they hold in Bangladesh society today. In Bangladesh it has a very rich history which is over 200 years old.  Bandhu Social Welfare Society (BSWS) has been working on improving health and rights of Hijra populations since October 2000. Ministry of Social Welfare (MOS) also taken number of initiatives as a part of better livelihood program. Under its safely net program the Ministry has also allocated funds in the national budget from 2013.  As a part of Policy and Advocacy initiative, over the last couple of years BSWS has been actively working with Govt. of Bangladesh and other relevant stakeholders on issues around health and human rights of Hijra population.

Acknowledging Hijra’s as third gender in November 2013 is a landmark decision made by the government of Bangladesh. Hijra community was looking forward to celebrate the day in collaboration with Government of Bangladesh and was pleading to the civil society and community based organizations to celebrate the very day of their gender recognition.  Bandhu Social Welfare Society (BSWS) jointly with Ministry of Social Welfare and UNAIDS therefore organized Hijra Pride 2014 to commemorate the day of third gender recognition for Hijra community with graceful support of its development partners at divisional and central level. A number of community based organizations including Sustha Jibon, Shomporker Noya Shetu, Rupban collaborated with BSWS to make this event a huge success.

Supporting Partners in organizing the event:

BSWS gracefully recognizes with deep appreciation the support of RFSU-Sweden, Embassy of Kingdom of Netherlands in Dhaka, RutgerWPF Global Human Rights Defense (GHRD) and UNDP in organizing this colorful, nationally and internationally well-regarded and appreciated this first of its kind event in the country.

BSWS also recognizes the cordial support of ATN Bangla, Dhaka Tribune, Bangla News-24, Dhaka-fm 90.4 and Color Horizon as valued Media Partners who professionally communicated the events and messages of those events to the mass people.

Celebration of Hijra Pride: the Central and Divisional level activities:

Pride rallies were organized at all divisions (Chittagong, Sylhet, Rajshahi, Rangpur, Barishal and Khulna) on 2nd November 2014. Hjra and their gurus (leaders) with banner and festoons and play cards and drum beats were joined by civil society members, students, pedestrians, Journalists and Lawyers in the rally.

The central rally (in Dhaka):

The rally in Dhaka was on 10 November 2014 where an approximate 1500 hijra marched in their country’s first ever Pride parade to mark one year recognition of third gender. The rally started from Press Club and ended at to National Museum premises.  With dancing and singing and carrying banners which read: “The days of stigma, discrimination and fear are over” the pride rally of hijra with colorful saris, banners and festoons and a huge National flag, drew undivided attentions of the pedestrians and mass people of every tier of the society including national and international media. 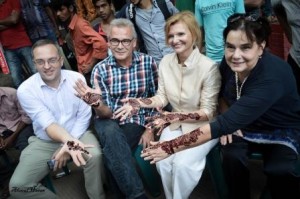 The henna festivals were organized in all divisions on 2nd November 2014 which gave a tremendous momentum to the Hijra Pride festive. People of all strata including hijra community members took spontaneous participation and colored their mind with various designs with henna. The central activities (Dhaka) started on 8th November 2014 with the inauguration of Henna Festival. The event was simultaneously organized at different locations of Dhaka city during 8-9 November 2014.   The presence of Mr. Johan Frisell, the Ambassador of Sweden, Ms. Merete Lundemo Ambassador of Norway, Ms. Martine van Hoogstraten, Deputy Ambassador of Netherlands and other officials from different foreign missions, community members and huge gathering of mass population made the central event festive, colorful and rewarding.

The talent hunt competition had a thriving response from the hijra community. A total of 16 top scorers from all divisions competed at the Talent Hunt Grand Finale held at National Museum Auditorium in Dhaka on 10 November 2014. The singing and dancing and acting before a huge audience of hijra community, policy makers, officials from government and non-government sectors, foreign diplomatic missions, UN agencies  gave the program a meaningful festive mood with a distinct message that if given opportunities, the hijra community can also contribute in the country’s growth like others.

« Regional Consultation on Faith, Cultural Diversity, Access to Health and HIV
Training on HIV and Human Rights for Emergent CBOs and In-country Downstream Partners in Bangladesh by BSWS »