Bandhu has organized a ‘Divisional Level Consultation Meeting at Jamalpur district’ on 5th November 2016 at Jamalpur district in order to mobilize the social support group members and to introduce human rights amongst the gender diversified population, networks and organizations. The objective of the program was to create an opportunity for accessing stigma free and non-discriminated services from leading key stakeholders at divisional level and to build effective networks with GO, NGO’s stakeholders for need based support at divisional level and seeking assistance from the people to eliminate these as well as. Bandhu invited two CBOs i.e Shiri Shomaj Kollan Songstha from Jamalpur and Setu Bondhon Kollan Shongho from Mymensing district in the meeting. Members of the CBOs, representatives from divisional/district administration, social welfare, women affair, civil surgeon’s office and NGOs conducting HIV intervention, members of STI/AIDS network and other influential of the society were presented. A total number of participants of this program were 42. 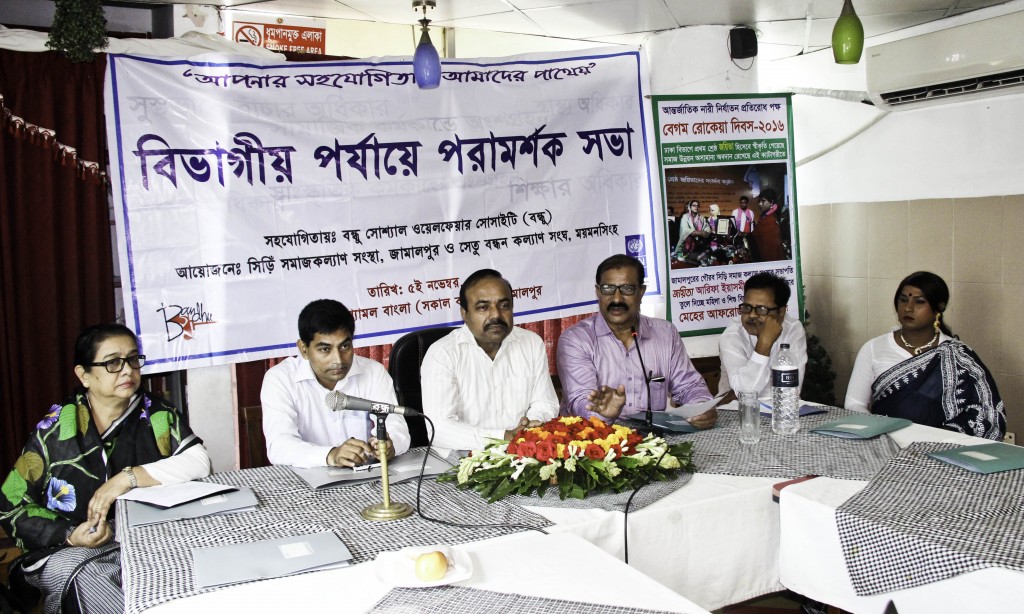 Md. Shahab Uddin Khan, DC of Jamalpur attended the event as Chief Guest and said that, “Bandhu should take the credibility for supporting the Hijra community.” He also informed that he will submit the final project proposal for land allocation in Jamalpur district and hope to get the approval soon. In addition, he has suggested working more for achieving the positive changes of the society, but also need to bring change within the Hijra community by themselves.

K M A A Mamun, NDC of Jamalpur as Special Guest said that , “Hijra people should include with job oriented work for sustainability of their life” Jannat Ur Nahar, PO of District Women Welfare Officer said “Women & Children Welfare Department at local level can help the Hijra people by including district level vocational training course”; Fazle Alahi Makam, Reporter of SA TV said” Media can play strong role for making a positive society for Hijra against all stigma and discriminations and Jamalpur district can be a role model of change maker for all other districts.